The New Administrative Capital (NAC)[1][2] (Arabic: العاصمة الإدارية الجديدة‎, romanized: Al-ʿĀṣima al-ʾIdāriyya al-Jadīda) is a large-scale project of a new capital city in Egypt that has been under construction since 2015.[3] It was announced by the then Egyptian housing minister Mostafa Madbouly at the Egypt Economic Development Conference on 13 March 2015.[4] The capital city is considered one of the programs and projects for economic development, which is part of a larger initiative called Egypt Vision 2030.[5]

The new capital of Egypt is yet to be given a name. A competition was launched on the new capital's website to choose a new name and logo for the city, noting that a jury of specialists were formed to evaluate the proposals submitted to list and determine the best among all the proposals.[6][7] Though, no official results have yet been announced by the Egyptian Government.

The new city is to be located 45 kilometres (28 miles) east of Cairo and just outside the Second Greater Cairo Ring Road, in a currently largely undeveloped area halfway to the seaport city of Suez. According to the plans, the city will become the new administrative and financial capital of Egypt, housing the main government departments and ministries, as well as foreign embassies. On 700 square kilometres (270 sq mi) total area, it would have a population of 6.5 million people, though it is estimated that the figure could rise to seven million.[8][9]

Officially, a major reason for the undertaking of the project was to relieve congestion in Cairo, which is already one of the world's most crowded cities, with the population of Greater Cairo expected to double in the next few decades.[10][11] Cairo, for comparison, has a population of nearly 20 million.

The city is planned to consist of 21 residential districts and 25 "dedicated districts". Its downtown is to have skyscrapers, among which are the Oblisco Capitale, which is designed in the form of a Pharaonic obelisk and will stand at a height of 1,000 meters, becoming the tallest in the world; and the Iconic Tower, which is the tallest in Africa. The city will also have a central park, artificial lakes, about 2,000 educational institutions, a technology and innovation park, 663 hospitals and clinics, 1,250 mosques and churches, a 90,000-seat stadium, 40,000 hotel rooms, a major theme park four times the size of Disneyland, 90 square kilometers of solar energy farms, an electric railway link with Cairo and a new international airport at the site of the Egyptian Air Force's existing Wadi al Jandali Airport.[9][10][12][13][14][15][16][17][18][3]

It will be built as a smart city. It is planned that the transfer of parliament, presidential palaces, government ministries and foreign embassies will be completed between 2020 and 2022, at a cost of USD 45 billion. A full cost and timescale for the overall project has not been disclosed.[18] The first government officials were moved into their new offices in 2019.[19]

Feedback on former experiences of capital relocation was looked at, for instance by meeting with representatives from Nur-Sultan (then Astana), which replaced Almaty as the capital city of Kazakhstan in 1997.[20]

In January 2019, President Abdel Fattah al-Sisi inaugurated a large-scale cathedral and a mosque.[21]

The Nativity of Christ Cathedral[edit]

The Nativity of Christ is a mega-cathedral, the largest of its kind in Egypt and the Middle East.[21]

Al-Fattah Al-Aleem is a mega-mosque, the largest of its kind in Egypt.[22]

The Iconic Tower is a skyscraper currently under construction, set to be Egypt and Africa's largest skyscraper.[23]

The Oblisco Capitale is a planned and approved skyscraper set to be inaugurated in 2030, it is designed by the Egyptian architectural design firm IDIA in the form of a Pharaonic obelisk, and, once finished, it will be the tallest building in the world at a height of 1,000 metres (3,300 ft), surpassing the world's current tallest tower, Burj Khalifa.[24]

The Capital Park (also known as Green River) is an urban park set extend along the entirety of the new capital representing the Nile river, it is expected to be 35 kilometres (22 mi) long, aiming to be double the size of New York's Central Park. The initial phase of the park will be of about the first 10 kilometres (6.2 mi), which is currently under construction.[25][26]

The Octagon (State's Strategic Leadership Centre) is Egypt's new Ministry of Defense headquarters, the complex is considered the largest of its kind in the Middle East and one of the largest in the world, much like The Pentagon in the United States of America.[27][28]

A train to Cairo is being built. The line will start from Adly Mansour Station at Al Salam City on Cairo Metro Line 3, and will split into two branches at Robeiky. One will run northward, parallel to the Cairo Ring Road, to 10th of Ramadan City, and the other will go south towards the New Administrative Capital. Intermediate cities along the train's route include Obour, Shorouk, and Mostaqbal.[31] In addition, a monorail line currently under construction will connect Giza to the new capital passing through Cairo.[32] In January 2021, Egypt signed a contract with Siemens to construct a high speed rail line that extends from the northern Mediterranean city of El Alamein to Ain Sokhna city on the red sea passing through the new capital and Alexandria. The 450 km line is expected to be finished by 2023. Later phases of the 1750 km high speed network will connect the new capital with cities as far as Aswan in the south of Egypt.[33]

Speaking prior to the official announcement, Egypt's investment minister Ashraf Salman had already mentioned the possibility of a new capital being "developed, master-planned and executed by a private sector company", at no cost to the Egyptian treasury.[34] It was revealed that the city will be built by Capital City Partners, a private real estate investment firm led by Emirati businessman Mohamed Alabbar.[8]

When the project was officially announced in March 2015, it was revealed that the Egyptian military had already begun building a road from Cairo to the site of the future capital.[3]

In September 2015, Egypt cancelled the memorandum of understanding (MoU) signed with the UAE's Mohamed Alabbar during the March economic summit, since they did not make any progress with the proposed plans.[35] In the same month Egypt signed a new MoU with China State Construction Engineering Corporation (CSCEC) to "study building and financing" the administrative part of the new capital, which will include ministries, government agencies and the president's office.[36] CSCEC signed agreements with Egyptian authorities in early 2016 and in 2017 and 2018 to develop parts of the project.[37][38][39][40] Egyptian construction company Arab Contractors (in Arabic El-Mokawloon El-Arab) was called for constructing the water supply and sewage lines to the new capital.[41] The company stated that the studies needed were done in August[when?] and it is supposed that the project will take 3 months to supply the city with the main services needed in order to prepare it for the construction work. 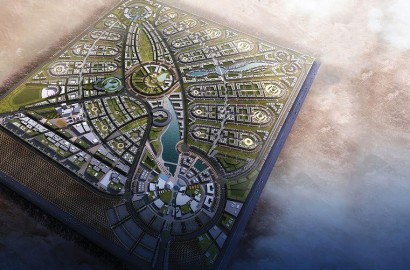